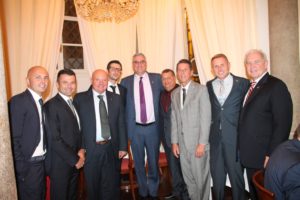 MILAN (Sept. 20, 2018) – Governor Eric J. Holcomb and Delaware County officials joined Filtrec S.p.A., an Italy-based manufacturer of filters and filter elements, in Milan this week as the company announced plans to locate its first U.S. operation in Indiana. The company will invest $1.3 million to establish a facility in Daleville, which will serve as the company’s North American headquarters.

“We’re thrilled Filtrec is establishing its North American headquarters in Daleville and glad to be in Milan to celebrate this milestone with them,” Gov. Holcomb said. “Our partnership with Filtrec is possible because of our continued efforts to take Indiana to the world and bring the world back to Indiana and we can’t wait to see Filtrec’s success in Indiana.”

Filtrec S.p.A, which is headquartered in the Province of Bergamo in northern Italy, will establish Filtrec North America at 12690 W. County Road 550 S. in Daleville in order to expand its market and supply to North America, serving customers across the U.S., Canada, Mexico and Latin America. The company will initially occupy a 5,800-square-foot facility, with plans to double or triple its footprint in the next five years, that will include office space for the company’s executive and sales teams as well as 4,300 square feet of state-of-the-art manufacturing space, allowing the company to produce high-quality hydraulic filter elements and filter assemblies for applications on suction, pressure and return lines of hydraulic systems.

“There were many factors that led Filtrec S.p.A. to choose Indiana for its North American Headquarters,” said Sergio Modina, CEO of Filtrec S.p.A. “For one thing, multiple well-known Italian companies have invested in Indiana, and those investments have proven successful. The exchange of information made us look deeply into selecting Indiana as a base for the United States. Being the Crossroads of America, Indiana has great roads, rail and air assets, which is ideal for Filtrec S.p.A. being the hub for Canada, Mexico and South America. In addition to all of that, while we considered this expansion as well as future manufacturing developments, the presence of existing key supplies located in and near Indiana was key, as was an experienced and available workforce.”

The company launched its sales operations in Delaware County earlier this month after moving a large stock of finished products ready to supply North American customers into the facility and plans to have its manufacturing operations at full capacity in Indiana within the next three years. As part of its growth, the company plans to create 25 new, high-wage jobs by the end of 2022 and has already added two positions in Daleville. Filtrec S.p.A. anticipates hiring for sales, quality, administrative, technical and executive positions in late 2019.

“We are thrilled to welcome Filtrec’s North American Headquarters to Delaware County,” said Shannon Henry, Delaware County Commissioner. “The addition of their product line will help diversify our local economy and give Filtrec the opportunity to work with other local industries to manufacture and supply products. We couldn’t have asked for a better company to call Delaware County ‘home.'”

Established in 1991, Filtrec S.p.A. designs, produces and supplies filtration products for a variety of fixed and mobile applications, ensuring the cleanliness of oils and fluids in hydraulic and lubrication systems to maintain the system’s efficiency and reliability. With locations in Australia, China, Germany, India, Spain, Turkey, UAE, Brazil and the UK, Filtrec serves customers in markets of agriculture, heavy machinery, forestry as well as foundries, steel plants, paper mills, oil and gas companies and more.

“Delaware County officials played an important role in Filtrec choosing this specific location,” Modina said. “They helped us understand the advantages of being in a county strategically located less than 60 miles from Indianapolis where quality of life and a great community can be enjoyed. Delaware County is home to multiple companies related to hydraulics, our primary business, creating potential for more local opportunities to be explored in the future.”

The Indiana Economic Development Corporation offered Filtrec North America up to $275,000 in conditional tax credits based on the company’s job creation plans. These tax credits are performance-based, meaning until Hoosiers are hired, the company is not eligible to claim incentives. The Delaware County Redevelopment Commission also offered incentives up to $12,500 at the request of Delaware County Economic Development and Redevelopment.

This news comes during Gov. Holcomb’s three-day economic development trip to Italy, which, like Indiana, has a strong automotive sector. Filtrec S.p.A. is the 31st Italian company to establish operations in Indiana, joining businesses like OMR Automotive in Speedway, Fontana Group in Frankfort and Rochester (Acument Global Technologies) and Valbruna Group in Fort Wayne. On Wednesday evening, the governor hosted a Friends of Indiana reception in Milan, convening business executives and government officials with ties to Indiana and Italy, including executives of Filtrec S.p.A.

About Filtrec S.p. A.
SFILTRATION EFFICIENCY, SIMPLY SAY FILTREC.
FILTREC S.p.A. is a leading Italian manufacturer of  hydraulic and process filters. With more than 25 years of experience and know-how,  our filters efficiently satisfy the filtration requirements of countless applications worldwide. R&D has a key role within FILTREC and custom tailored production facilities ensure the best quality features to each product. FILTREC export share exceeds 90%  through worldwide distributors and own subsidiaries ensuring a premium customer service.