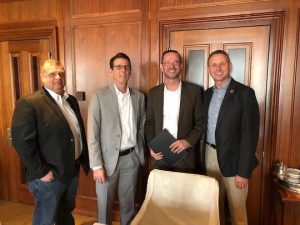 MUNCIE, Ind. — Delaware County officials concluded a seven-day trip to Germany and the Netherlands on April 18, resulting in two German companies planning to visit Delaware County as early as this summer.

County commissioner James King, along with Brad Bookout, Ddrector of Municipal and Economic Affairs and Bill Walters, director of the ECI Regional Planning District, met with several companies and trade organizations that want to make Indiana a location for future development.

King said the trip was exceptionally productive, especially with two companies already wanting to come to the area. He said a local representative being able to talk with foreign companies, instead of state officials, means they can better market the Delaware County specifically.

Indiana’s economic drivers are something officials have said make the state a viable business partner. Statistics show that Indiana’s total manufacturing output in 2018 exceeded $98.4 billion, and 7,076 companies exported in excess of $37.8 billion in goods and services.

This isn’t the first time county officials had good news from a trip like this. After Delaware County officials went to Italy last year on a similar trip, they came back to the county with a new business partner.

Filtrec S.p.A., an Italian-based manufacturer of filters and filter elements, announced plans in October 2018 to locate its first U.S. operation in Indiana, investing $1.3 million in Daleville.

For King though, it still comes down to being able to meet face to face with companies and show them what the the county has to offer beyond economics. Showing off the county’s quality-of-life amenities, especially the schools, makes potential investors more confident.

“The people of Delaware County will be their workers,” King said, noting that the quality of life for potential employees and their families carries a big impact on investment plans.

State officials as well as the commissioners have said that Europe represents one of Indiana’s largest regions for foreign investment and trade ties. More than 450 European businesses currently call Indiana home, accounting for almost 113,000 jobs.

County officials also met with the Transatlantic Business and Investment Council, the Chamber of Commerce from both Brandenburg and Munich, Germany, the Investor Acquisition team at the U.S. Embassy in Berlin, the U.S. Consulate in Munich, as well as multiple mid- to large-sized German companies with interest in the United States.