No matter if it’s the first steps toward a $30-million plan to widen an interstate highway through two counties, or less than $2,000 to paint markings at a town railroad crossing, growth and improvements and economic development don’t just happen.

They require coordinated efforts like those the staff of the East Central Indiana Regional Planning District tackles every day.

Created to serve communities throughout East Central Indiana, the Regional Planning District is supported by municipal partners in Delaware, Blackford and Grant counties and the city of Portland in Jay County.

The ECIRPD works with its partners in government to improve the quality of life in the region, said Bill Walters, executive director of ECIRPD.

“Our mission is to serve the local governments of Blackford, Delaware and Grant counties, along with the city of Portland in Jay County, by fostering a vision for regional economic growth through grant writing, facilitating, infrastructure improvements, supporting economic development and promoting quality of life and community enhancements,” Walters said.

That sounds like a lot, but Walters and the ECIRPD staff reach that goal by knowing their jobs and doing them better than anyone else, elected officials in the region say.

“They stay on top of things and they hear things that we in smaller communities might not ever know about,” said Kathy Bantz, mayor of the city of Montpelier in Blackford County. “They have been fantastic to work with.”

“The planning district is great,” King said. “It brings all the elected officials in, we discuss the projects we’d like to do and once a year we go to Washington to talk to our senators and representatives.

“The county pays $35,000 toward the program, and when you can receive a half-million to a million dollars in grants just for brownfields, you want to be part of the district,” King added.

“What’s good for the region is good for Grant County, and everybody is in this together,” said Shane Middlesworth, a Grant County commissioner. He cited the Regional Planning District’s work on projects as large as the proposed Interstate 69 widening and as small as projects throughout Grant County. “It’s a valued partnership.”

Since Walters joined the Regional Planning District in 2017, ECIRPD has gone from pursuing a single grant to administering a dozen grants and applying for even more to fund a variety of projects to help communities grow.

“We’re not just a grant seeker,” he said. “We don’t just throw the money at our partners. We walk them through every step of a project. We assist in any way, shape or form.”

ECIRPD – created in 2009 as a non-profit, state-designated planning district – helps its government partners with not only securing grants but also planning and strategic thinking, Walters said.

“There’s a lot of behind-the-scenes, slow-paced work, but you finally see the fruits of your labor,” he said.

Because dollars can have a huge impact on a community – whether they are dollars won or dollars lost – a handful of the many grants in the works through the East Central Indiana Regional Planning District show the breadth and scope of the work.

Some of those grants: 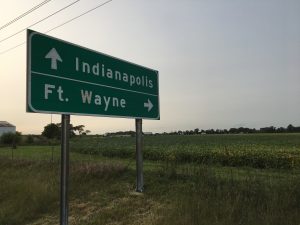 Interstate 69 Corridor Economic Impact Assessment: ECIRPD is partnering with Ball State University to use a $177,200 grant to study the possibility of widening the interstate through Delaware and Grant counties. The ultimate goal, if the Indiana Department of Transportation carries the project forward, would see the interstate widened from four lanes to six lanes through the two counties. ECIRPD would pursue a $30 million BUILD (Better Utilizing Investments to Leverage Development) grant from the U.S. Department of Transportation. (INDOT could choose to pursue widening all the way to Fort Wayne.)

“We’re hoping we can prove that the Interstate 69 corridor from Indianapolis to Michigan is a vital economic hub,” Walters said. Moving the project forward will require partnerships that include INDOT and local communities, Walters said. That’s a task that ECIRPD is taking on.

Community Crossing Grant for the Town of Daleville: $212,000 for a 75/25 match for road micro surfacing and pavement marking.

Grants the ECIRPD is applying for:

$1,750 for pavement markings at a railroad crossing in the Town of Daleville.

$600,000 for a U.S. EPA Brownfield Coalition Grant to identify and remediate areas in Muncie, Delaware County and the ECI Regional Planning District.

$4.5 million for expansion of the City of Montpelier’s Baldwin Industrial Park.

$3.5 million for a stormwater project for the Town of Daleville.

$1.8 million for an enhanced entrance for the Park One business park at Ind. 332 and Interstate 69 in western Delaware County. Walters said the new use of a county-owned rail spur in the business park would mean increased truck traffic, so a new entrance will be built along Ind. 332.

$750,000 for a U.S. EDA Economic Resilience grant for a five-year program in response to COVID-19. Walters said that depending on how long the COVID-19 crisis and its ramifications last, change and improvement will be needed to internet broadband, logistics, hospitals and the food system.

“This thing that would never happen in a hundred years?” Walters said about the pandemic. “We have to be ready for the next one.”

“But what doesn’t change is the necessity to move forward,” he added. “ECI Regional Planning District has done a lot of good things. Our goal is to help communities and municipalities continue to move forward.”

For more information about the East Central Indiana Regional Planning District and its projects, go to www.ecirpd.org.