DELAWARE COUNTY, Indiana – Classic hot rods and muscle cars have been a big part of Steve Myers’ life. Now Myers hopes to use a local historic building to make classic cars once again a big part of Delaware County.

Delaware County officials have facilitated Myers’ purchase, from the city of Muncie, of a nearly-100-year-old garage in downtown. The building at 213 E. Washington Street was the site of car-oriented businesses for decades and was also the longtime city street garage.

Myers is the owner and operator of Myers Performance Engineering and plans to turn the three-story Washington Street building, which was built with an interior ramp system, into his company’s world headquarters. 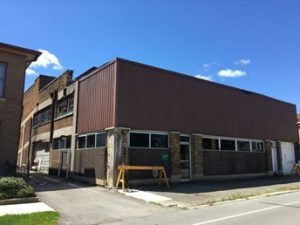 Besides Myers Performance Engineering, the building will house businesses catering to Myers’ business interests and customers: collectors of classic hot rods, muscle cars and pickups. His planned businesses will include the Hot Rod Shop Performance Parts, Stevie Ray’s Muscle Cars and Classics and other ventures yet to be announced.

Myers has lived and breathed automotives and car culture for most of his life and quoted his father about the importance of the automobile.

“My father used to say, ‘We Americans have a love for automobiles,’” Myers said. “Here in America, we were born and raised with the automobile, at least my generation and the generation before me. The automobile played a big part in our lives, but as we grew, that’s gotten away. A lot of cars look the same.

“I want to help bring back car culture in Delaware County,” Myers said.

Myers is talking about customized and built classic cars but also is referring to how the automotive industry – particularly the manual transmission – provided thousands of dependable jobs in local factories like Warner Gear/BorgWarner Automotive and Chevrolet Muncie.

Those plants are gone, but the heart of car culture remains and Myers wants to do his part in jump-starting it.

Myers just took possession of the building, which has been unused for a couple of decades but was previously the city police and street garage, sewage utility payment office and, in a portion of the building, the Muncie Police Department mounted patrol.

For decades before that, the building was home to auto dealers, vehicle storage providers and, during World War II, the Omar Bakery distribution center.

Even before the present building was built circa 1925 and opened as the Torrence Garage and Kilmer Bros. Hudson-Essex car dealership in November 1929, the property was the site of a boarding house and the consultation rooms of a clairvoyant, Madam Cooper, “The world wonder gifted trance medium,” according to 1915 newspaper advertisements.

Myers looked around for a site to replace the location he leases and has recently outgrown.

“I wanted something with character,” Myers said. “The character just adds to the classic cars. 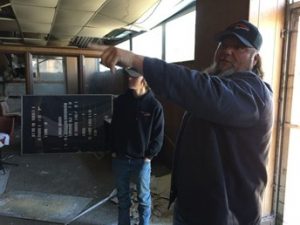 “I fell in love with that building, and here we go, almost a hundred years later, we’re going in there with hot rods, custom cars, muscle cars and trucks,” Myers added.

His son, Steve Myers II, is a part of his company and, as they grow, they expect to hire more employees.

Myers is a Muncie native who currently operates Myers Performance Engineering at 1661 S. Nebo Road. He’s been in the business since 1995.

A focus of the business has been the construction of one hot rod each year, “every nut and bolt.”

“Our niche customer is looking for that hot rod, muscle car or pickup,” he said.

Myers also buys and sells at car auctions in the Midwest. In 2020, the pandemic “put a damper” on auctions, he said.

Myers’ plan for his new building is to establish his hot rod shop – with a showplace for a hot rod – in part of the first-floor space. His businesses will expand and locate into other parts of the building gradually. Besides the interior features like the ramp system, the building has two garage doors.

Myers has spoken with a contractor about work on the building, including restoration of parts of the brick exterior, and expects to tackle the work in phases. The first phase, taking about ten months, will see work to get the building “dry, safe and sealed.” Other phases will follow.

“We’re very pleased to work with Steve to put him in the right building and help his dream grow in a way that benefits the region,” said Walters.

Delaware County commissioners president James King, who is also president of the ECI Regional Planning District Board, said, “We’ve put together a program whereby municipal entities can work with the Planning District to advertise properties via a Request for Proposals (RFP).  The end result is that we find local folks who want to fix these properties up and are putting them back on the tax rolls.  Even though this property was owned by the city and unused for decades, Myers Performance Engineering is committed to putting in the time, investment and sacrifice to locate his business in the building.”

“Myers Performance Engineering will be a real asset to downtown Muncie,” Mayor Dan Ridenour said. “And it’s great to see a new use for one of our historic downtown buildings.”

In 2015 the Delaware County Commissioners privatized the County’s economic development activities. Since that time, the County has developed its own business retention and expansion programs that are in constant contact with the multitude of industry within the County.  In addition, efforts to identify and attract various suitable industry throughout the world are undertaken on an annual basis.  For more information, contact Brad Bookout at bbookout@augustaconsultingllc.com.