Factories make things. They use machines to manufacture goods: Everything from cars, computers, and furniture to jeans, paper towels, and chocolate bars.

There is a new type of factory, however, and it is producing plants.

For most, farming conjures the image of a patchwork of fields — a quilt stretching far into the distance.

But what if, instead of spreading out, the fields went up? That’s the idea behind vertical farming. 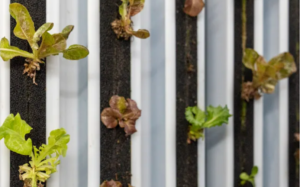 Vertical farming is the practice of growing crops in vertically stacked layers. It conserves space while, at the same time, amplifying yield per square foot compared to a traditional farm field. A relatively new way of farming, these facilities are now part of a budding industry — including right here in Indiana.

In the middle of the state’s vast expanses of corn and soybean fields, a new plant factory is taking shape. Muncie will be home to a new vertical farm which will be one of the largest in the state — and possibly the country. It will grow its fresh greens and herbs not in soil across acres of land, but suspended as much as 20 feet into the air.

“At the end of the day, we are still farmers,” said George Pastrana, the president and CEO of Living Greens, Inc., Muncie’s new tenant. “We are growing a living organism that human beings have been growing for forever.”

Just in a slightly different way, he added.

Grown IN Indiana: We are known as a corn and soy state. But there is much more to farming in Indiana.

The vertical approach can offer benefits both to the environment as well as the communities around the farms. The operations use less water, take up less space, pose less risk of contamination and deliver fresher produce to nearby stores and Hoosier tables.

“These plant factories produce healthy fresh food in urban areas where there is huge demand,” said Krishna Nemali, an assistant professor of agriculture at Purdue University. “There is a huge impact for the community and society.”

‘Still in its infancy’

Vertical farming is a type of what’s called controlled environment agriculture, or CEA. Simply put, it’s the production of plants such as vegetables, herbs and fruits inside structures where the conditions can be monitored and managed.

The umbrella term is used to describe multiple and different growing platforms. On the one end, there are the most basic, common and well-known types of CEA: hoop-houses and greenhouses. 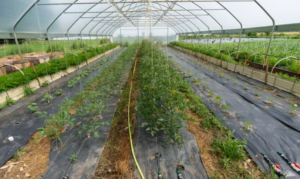 The former is usually a fairly small structure with plastic sheeting over it. Hoop-houses allow growers to start in March rather than waiting until May but otherwise offers little other control of conditions. The next step up is a greenhouse, which is a bit more sophisticated and can have ventilation or air cooling.

“Controlled environment agriculture is nothing new,” said Nemali, who specializes in CEA, “but there also are a lot of new things happening from what’s already there.”

“(Vertical farming) is still in its infancy,” Pastrana of Living Greens said. “It’s only been commercialized in any meaningful way in just the last 10, maybe 15, years and we are still just scratching the surface.”

Living Greens first began 11 years ago, and it spent the first eight years focusing on research and development and “perfecting the 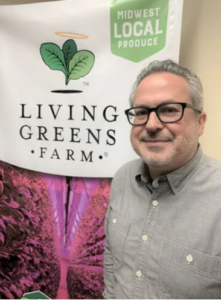 technology.” Once they had it figured out, the company shifted gears, acquired its patents and launched its first farm in Minnesota.

To read the rest of this article click here.