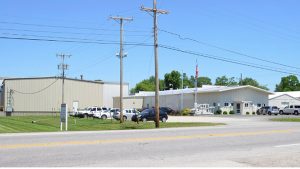 DELAWARE COUNTY, Indiana – In another move to create jobs and revenue and reclaim an empty industrial site, the Delaware County (Indiana) commissioners have announced that a closed machine shop in the town of Albany has been purchased by an Illinois company that will relocate its headquarters there.

“Our goals are very long-term because we’re such a young company,” Pinson said. The company was founded in 2016 in Arthur, Illinois, and Pinson’s brother, Nathan M. Pinson, is its vice president.

Leon Pinson said the company looked at other communities and industrial facilities around Indiana before meeting Delaware County and Albany officials and recognizing that the Albany site was a good fit.

“We’re happy they’re coming to Albany,” said Shannon Henry, Delaware County commissioner and Albany resident who is also the town’s marshal. “With Littler being gone, the Albany area lost over a hundred jobs. Getting someone in that building who has growth potential has been a goal.”

“From the town council and town of Albany’s point of view, we are delighted they’re going to make use of that building,” Albany Town Council member Steve Hall said. “We’re hoping that business can grow. It obviously will help us in terms of our assessed valuation for the town and help us with our tax base.”

The Pinson brothers anticipate immediately employing five people after its move from Illinois in 2021.  Within five years, that number is expected to grow to 25 to 30.

Littler Diecast manufactured aluminum castings for decades until the business closed in 2018, two years after the family-owned company was sold to an offshore corporation. About 100 jobs were lost when the factory closed.

The closing had a negative impact on the town of Albany and Delaware County as a whole, so the coming of a new company has real promise.

PMC will utilize “the biggest unused industrial building we have,” Henry added.

“The building layout was very accommodating for our operation and seemed like a good fit for our goals,” Pinson said. “It was fascinating to learn how Littler Diecast was built.”

The Pinson brothers will move to the area, Pinson said, and the Albany location was appealing because “we’re from small farm towns in Illinois and prefer the lifestyle.”

“Working with the economic development officials in Delaware County has been phenomenal,” Pinson said. “Right from the very beginning, they were very helpful in making sure we had the necessary information to make our decision for the location. They took a genuine interest in our project and made us feel welcome in Albany and Delaware County.”

Hall said, “We’re delighted to work with them and it’s a win-win.”

Brad Bookout, Director of Economic and Municipal Affairs said, “For decades, Albany residents watched the Littler family incrementally grow Littler Diecast from a small company to an industry recognized leader.  With the Pinson brothers purchase of the facility and their mindset to grow their business here, I see similarities to the original ownership that are just a generation apart. To me, that is exciting and I wish them great success.”

The Delaware County commissioners have been scoring economic development wins even in the midst of the pandemic and struggling economy.

The commissioners on August 3 announced that an unused railroad spur at a failed wind turbine manufacturing facility would be repurposed for use by Ohio-based Good Industries as a transloading facility, where products and materials will be transferred from trucks to trains or from trains to trucks.

Earlier in the summer, the commissioners announced that Balance Holdings was acquiring 33 acres at Interstate 69 in Daleville for development of a 100,000-square-foot headquarters and an estimated $18-million investment and INOX Market Service is acquiring 18 acres in the Industria Center for development of a 139,000- square-foot facility and a $15-million investment.

In 2015 the Delaware County Commissioners privatized the County’s economic development activities in conjunction with the ECI Regional Planning District. Since that time, the County has developed business retention and expansion programs that are in constant contact with the multitude of industry within the County.  In addition, efforts to identify and attract various suitable industry throughout the world are undertaken on an annual basis.  For more information, contact Brad Bookout at bbookout@ecirpd.org.

Pinson Manufacturing Company has its origins deeply rooted in Machining and Fabrication. The founders; brothers Nathan and Leon Pinson worked in machine shops from early life and struck out on their own in 2016 to create PMC. Their purpose was to cater to customers in the Central Illinois region. In 2020, the company plans to expand to an 82,000 Sq Ft facility in Albany, IN, which will serve as the new PMC headquarters.  For more information visit: www.pinsonmfg.com