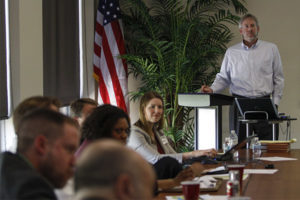 In 2013, ECIRPD was awarded a $150,000 planning grant from the United States Economic Development Administration (EDA) as part of its Investing in Manufacturing Communities Partnership (IMCP).

Since then, ECIRPD has been working with Vandewalle & Associates and the cities of Muncie, Anderson and New Castle to put these funds towards developing a strategic plan that will be submitted for review by the EDA in consideration for an IMCP designation that will give ECIRPD priority status for funding from 17 different federal agencies that altogether have $21 million to pull from.

Today, ECIRPD and Vandewalle & Associates, took the next step in developing this plan by hosting a meeting with the Economic Development Committee to get feedback and insight on what improvements are most needed within the three cities.

“The big idea here is to get your gears turning. If you’ve got some ideas, we want to hear them,” said Brad Bookout, an ECIRPD Project Manager.

The Economic Development Committee offered many suggestions. Some of the main concerns brought up by the committee were the need for downtown revitalization, rehabilitation and rebuilding of neighborhood housing, infrastructure improvements, introducing more manufacturing into education and improving the workforce.

The idea to create a regional green space connecting the three cities and make it a recreational or tourist destination was also mentioned.

“This is a great place and we can make it even better because we have a strong core to start with,” said Tom Farris.