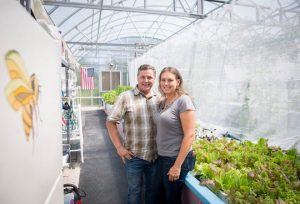 BHI is acquiring 33 acres at I-69 and Ind. 67 in Daleville for development of a new 100,000-square-foot headquarters and demonstration greenhouse, investing $18 million in new buildings and equipment at the location, according to a release from Delaware County officials.

To date, BHI has already hired 34 people in Delaware County and plans to hire more than 120 employees within the next 18 months, according to officials with the company.

“We’re really excited to be working with BHI on the development of their facility,” Delaware County Commissioner James King said in a news release announcing the development. “BHI’s team has been incredibly forthcoming with their plans and entrepreneurial spirit to continue business expansions that grow the local tax base and develop the site.”

In order to see it through the development of the project, BHI has already leased two temporary office complexes at 3701-3705 N. Briarwood Lane and 3525 Purdue Ave. in Muncie.

Glynn Barber, the CEO of BHI, patented the aquaponics system that the greenhouses currently use. It’s a combination of aquaculture, or raising fish in tanks, and hydroponics, or raising plants in troughs of water called Environmentally Controlled Sustainable Integrated Agriculture (ECSIA).

After multiple trials, Barber perfected the system and began marketing it to schools, nonprofits, hospitals, community organizations and others.

The facility in Daleville will be built for the continued development, design, and assembly of the ECSIA systems.

Barber’s greenhouse systems are already operational in a number of other locations across the country, including the city of East Chicago; the North Central Indiana Teen Challenge in Elkhart; Wapahani High School; and Urban REAP in Waco, Texas.

One of the greenhouses is planned to be built in Muncie.

The company is still working on constructing a $5 million to $8 million prototype aquaponics greenhouse, restaurant and exercise facility, called FARMacy, on West Jackson Street, a block west of the St. Mary’s Church.

Plans for expanding these systems are constantly growing, according to officials with the company.

“We’re following through with an aggressive ramp-up of the ECSIA system for full-scale production in Daleville. The location is incredible for what we plan to do and the assistance from the county has been second to none,” Peter Florio President and Chief Operating Officer, from BHI stated in a release.

“We’re really excited to have such a strong partner willing to make this level of investment in Delaware County,” Bookout said.

The Delaware County Council is planning to assist the development financially with a bond issuance for the project, which went through first read on Monday morning during the council’s monthly meeting.

Funding for the $2 million bond issuance is provided in full by BHI, but is repayable from tax revenue generated exclusively from the buildings BHI plans to construct. The TIF capture for bond repayment has been used previously on projects across the county.

According to Bookout, no existing taxpayer funds or taxpayer backup are necessary for the project. If the TIF revenue is short on any given year, the county isn’t on the hook for any shortfall; the developer is.

BHI plans to begin construction on the Delaware County facility this fall. The development will have other lots for sale within the complex for use by other companies.

Currently, two other companies are considering potentially locating adjacent to the BHI facility, according to officials with BHI, though no immediate information was available.